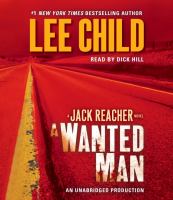 Typically a huge fan of the Reacher series and its audio adaptations, I was disappointed by this outing. Two most obvious issues: (i) unusually thin plot, with repetitions galore, twists that seem added only to fill pages (think: banking system? Say what?), and red-herrings/complexities to add further padding. And (ii) since Reacher opens the novel with a broken nose, his character sounds, appropriately, like a guy speaking with... wait for it... a broken nose. Which is distracting at first, and increasingly irritating as CD after CD spins away.

Maybe I'm just a hopeless Reacher shill, but I really liked this book. 8 of 10 for me.

A Wanted Man begins where Worth Dying For ended. Reacher is hitch hiking to Virginia to meet a woman with whom he conversed in an earlier novel. With his broken nose and dishevelled appearance, Reacher’s prospects for getting picked up are not promising. However, he does get a lift from 2 men and a woman who are not what they appear to be. Murder and mayhem ensue but initial progress is slow. As always Reacher is invincible and figures things out on his own. He will survive. The bad guys won’t and it’s best not to get too comfortable with the good guys either.
Child writes great action scenes but so do many authors. What distinguishes Child is the detailed analysis that takes place at the split second level. One punch or gun shot can have a fascinating, multi-paragraph build up.
All in all, Worth Dying For is another excellent entry in the series.

Jack Reacher continues to find himself in interesting and dangerous situations, and thinks things through as events unfold, measuring and trying to choose the best course of action. He is a man dedicated to justice, not wanting the limelight. He does what he needs to do, and he moves on.
Here, he is on a lonely highway in Nebraska in the winter, hitchhiking eastward, when he is picked up by a sedan carrying two men and a woman. As they group travels on, Reacher notices some inconsistencies in what he notices versus what he is told, and can see that the woman doesn't appear to be as much a part of the team as they've told him she is.
Meanwhile, back in Nebraska, a man is dead, the FBI has started an investigation and people are starting to go missing. Agent Karen Sorenson is on the case and following her own intuition for what to believe and who to confide in.
With page-turning action and lots of suspense, the reader is never disappointed.

The Full Record tab says it is unabridged.

Those of us who have become accustomed to the "Reacher Way," will be greatly disappointed by this story. Too much time is spent in automobiles and driving around the country in effort to come up with twists at the expense of a solid Reacher novel. 2 of 10 stars

Hopefully this is not abridged.